The Transcendental Meditation (TM) and TM-Sidhi programs are the most thoroughly researched and proven methods for producing more coherent brain functioning in the individual, and for creating a more peaceful and harmonious society.

1. Individual Benefits of TM More than 400 published research studies have shown that the Transcendental Meditation technique can reduce stress, anxiety and tension, while increasing intelligence, health and happiness.

Hundreds of scientific studies have been conducted on the benefits of the Transcendental Meditation program at more than 200 independent universities and research institutions worldwide over the past 40 years.

In the United States, the National Institutes of Health have awarded over $26 million to research the effectiveness of TM for reducing stress and stress-related illness with a focus on cardiovascular disease. Findings have been published in leading scientific journals, including The American Journal of Cardiology and the American Heart Association’s Hypertension and Stroke. 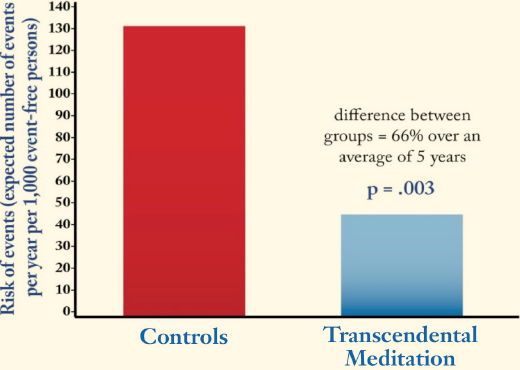 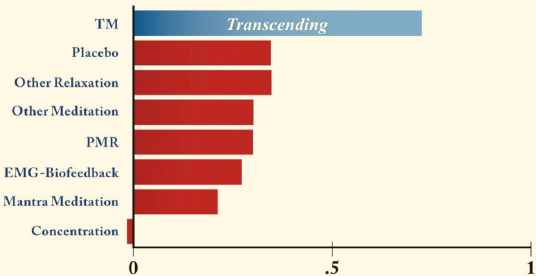 2. Brain Integration The TM technique spontaneously creates brainwave coherence, which means that the different areas of the brain are working together as one whole. This brain integration creates more orderly functioning for the mind and body. 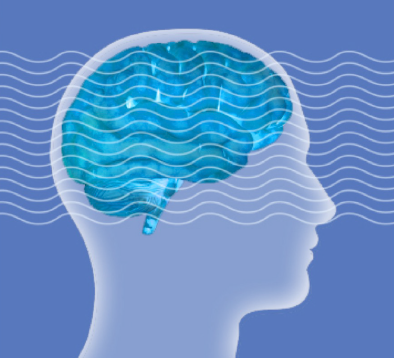 The normal brain (image on the left) shows all areas of the brain involved in thinking and making decisions, including the all-important pre-frontal cortex. When the brain is coherent and fully involved, our decisions, speech and action reflect that orderliness within the brain. 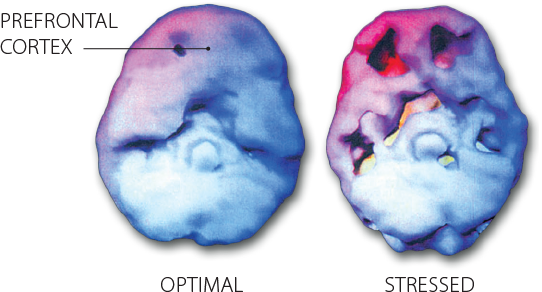 But when the brain is stressed (image on the right) we see what are called “functional holes” in the brain. These are not actual holes, but areas of the brain, including the pre-frontal cortex, that are not actively involved in thinking and decision-making.

Activity in the “functional holes” of the brain is restored as blood flow returns to the total brain. With regular practice of TM, the pre-frontal cortex will return to normal and continue to be more active.

3. Twice As Effective A review of 600 studies involving more than 20,000 people showed that the practice of Transcendental Meditation provides greater health benefits for the mind and body than all other forms of meditation and relaxation.

Scientific research shows that the Transcendental Meditation program is twice as effective as other relaxation or stress reduction techniques for reducing blood pressure and anxiety, increasing physical relaxation, improving mental functioning, and decreasing the use of cigarettes, alcohol, and drugs.

The Transcendental Meditation technique involves no focused attention or concentration, and no open monitoring or concentration. It is the process of self-transcending, and allows the mind to experience the silent source of thought deep automatic within. 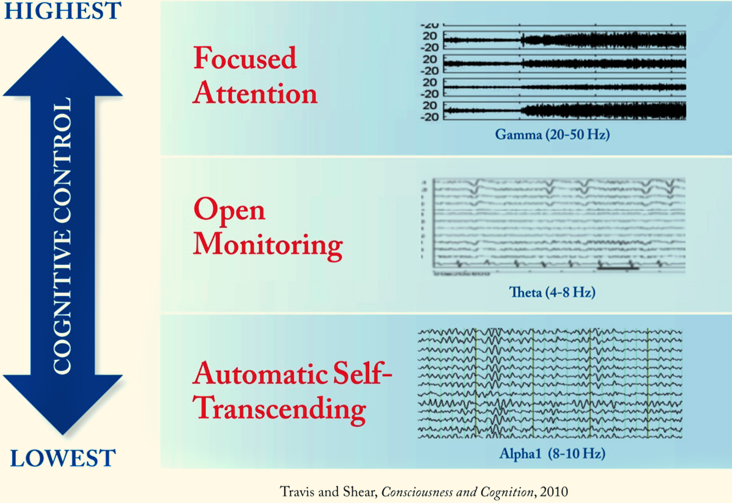 The brainwave patterns for TM and mindfulness are completely different. Open monitoring or mindfulness creates limited connections or EEG coherence in the brain. The TM technique, on the other hand, produces global brainwave coherence. This is the basis for the many positive changes in thinking, speech and behavior, as well as for the influence of coherence experienced by society as a whole. 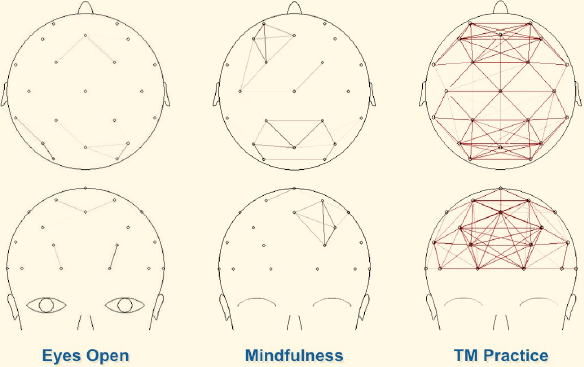 During the TM technique our mind easily settles inward, moving through quieter levels of thought, until we experience the most silent and peaceful level of our own awareness—transcendental consciousness.

Transcendental Meditation is completely effortless, and involves no trying to empty the mind. Anyone can practice TM successfully and gain the benefits.

4. Community Coherence When 1% of a city’s population learns the TM technique, there is a measureable decrease in crime and other social problems. Decreased stress in the lives of individuals will lower the overall level of stress in society as a whole.

Stressed individuals create a stressed society. An increase in societal stress is the first stage in the emergence of war. As stress and tension build up and reach a boiling point, they can erupt into crime and conflict on the local level, and even war and terrorism on the national level.

Individual practice of the TM technique has been shown by extensive published research to relieve individual stress. The practice of TM by 1% of a population has been shown to reduce stress in society, leading to reduced violent crime, domestic violence, and other indicators of societal stress.

Research has also shown that it is possible to defuse societal tensions by creating groups practicing the advanced TM-Sidhi program. In this case, even the square root of 1% of the population—such as within the military, or in universities or schools—can create positive effects for the whole society.

5. Peace Projects Scientific research has confirmed that large groups practicing the TM and TM-Sidhi programs have reduced war deaths and war-related injuries by an average of 80%, and have brought significant progress in restoring peace among rival factions.

Scientific studies have shown that the square root of 1% of the population practicing the TM-Sidhi program in large groups can defuse and prevent social conflict throughout the entire region.

Research on three large coherence-creating assemblies revealed a 72% reduction in worldwide terrorism during the three assemblies taken together, as compared to all other weeks during a two-year period.

A demonstration project in Washington DC created a significant drop in crime, in contrast to the usual increase in crime during the summer months.

But when the participants returned home at the end of these assemblies, the crime and terrorism returned to their previous levels. This shows the importance of establishing permanent groups practicing the TM-Sidhi program.

The goal of the New Solutions project is to create permanent Coherence-Creating Groups of 5,000 to 10,000 people throughout Latin America. 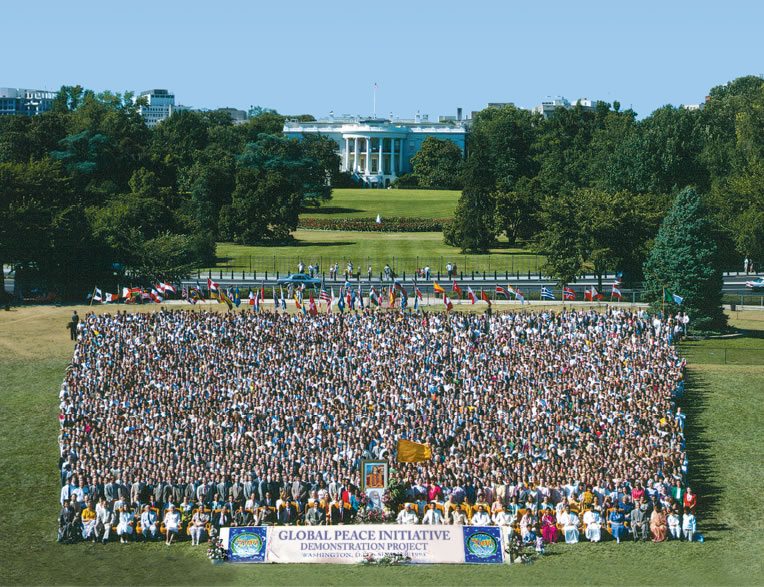 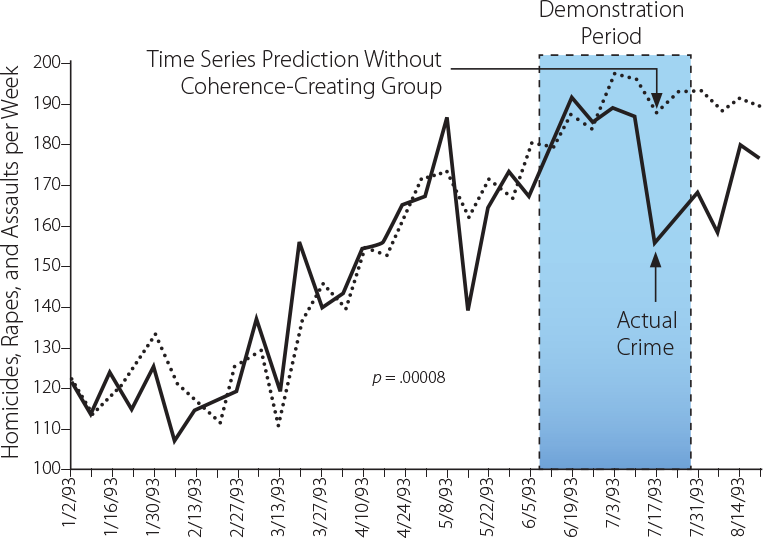 Bibliography of Research Publications This bibliography lists 417 papers on the Transcendental Meditation and TM-Sidhi programs published in peer-reviewed journals or other independent edited scientific publications. Most of these papers report original studies or reviews of research; a small number provide important comment or clarification regarding specific studies, including responses to critiques. A few studies examine a comprehensive multimodal approach to health that includes TM.